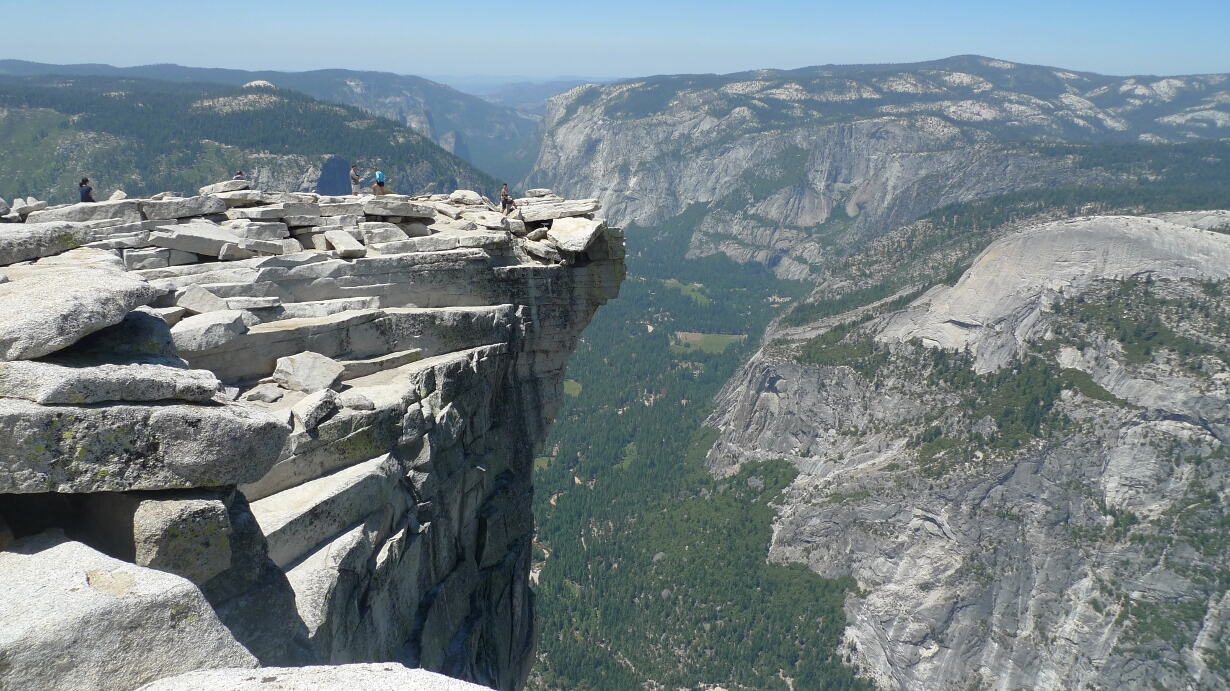 Around 3am at the 4th of July, we woke up, packed our tent and drove from Summerdale Campground to the trail head for the Half Dome hike. The hike is about 22.7km with a 1,600m gain in elevation! So we had to start quite early. When we arrived at 4:30am, there was still plenty of space for parking and in the bear boxes. After stuffing our food away, we joined the trail which was already busy with hikers eager to make it to the top. After 30 minutes, we reached the first bridge with a view towards Vernal Falls. Here we had our last chance to refill our water bottles, so we drank as much as we could – we expected another very hot day. We then made it up to Vernal Falls and further up to Nevada Falls. The trail offered beautiful views of the falls. After Nevada Falls, we started to traverse Little Yosemite Valley, the only flat part of the hike. Half Dome was now on the left of us. 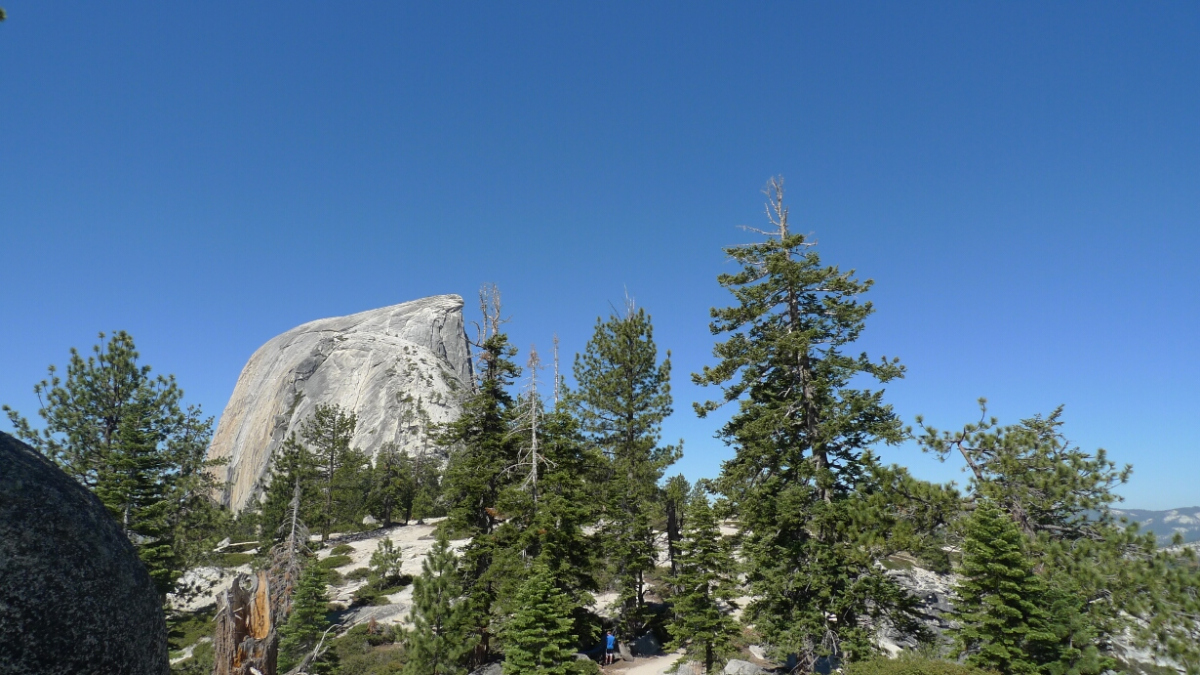 After the Valley, the trail turned left into the forest going up to sub dome. We arrived at noon at the foot of sub dome, where a ranger checked our permits. The ascent of the sub dome proved to be very exhausting since it was very steep and we were fully exposed to the sun for the first time of the hike. We made little breaks under the few trees around and enjoyed the amazing views. Here is Cloud’s Rest from sub dome. 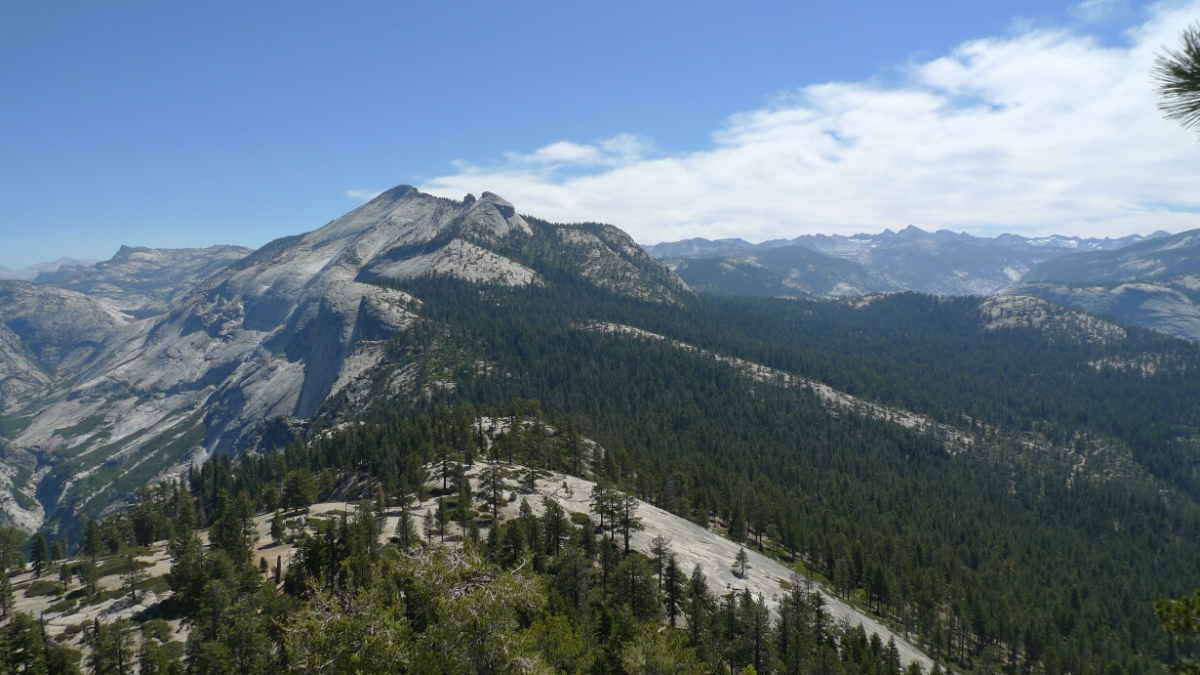 After another 30 minutes, we could the see the last challenge towards the top – the famous cables, and they looked impressive indeed. We looked through the pile of gloves and found a pair of rubber gloves for each of us. It’s hard to keep track of time on the cables, but i guess it took us about 30 minutes for the final part – including a first, unsuccessful attempt and many thoughts of ice cream and the fun things of life. Once we arrived at the top, it was amazing to see how much space there is up there. You can circle the moon landscape of the top plateau in about 45 minutes, with great views all around. 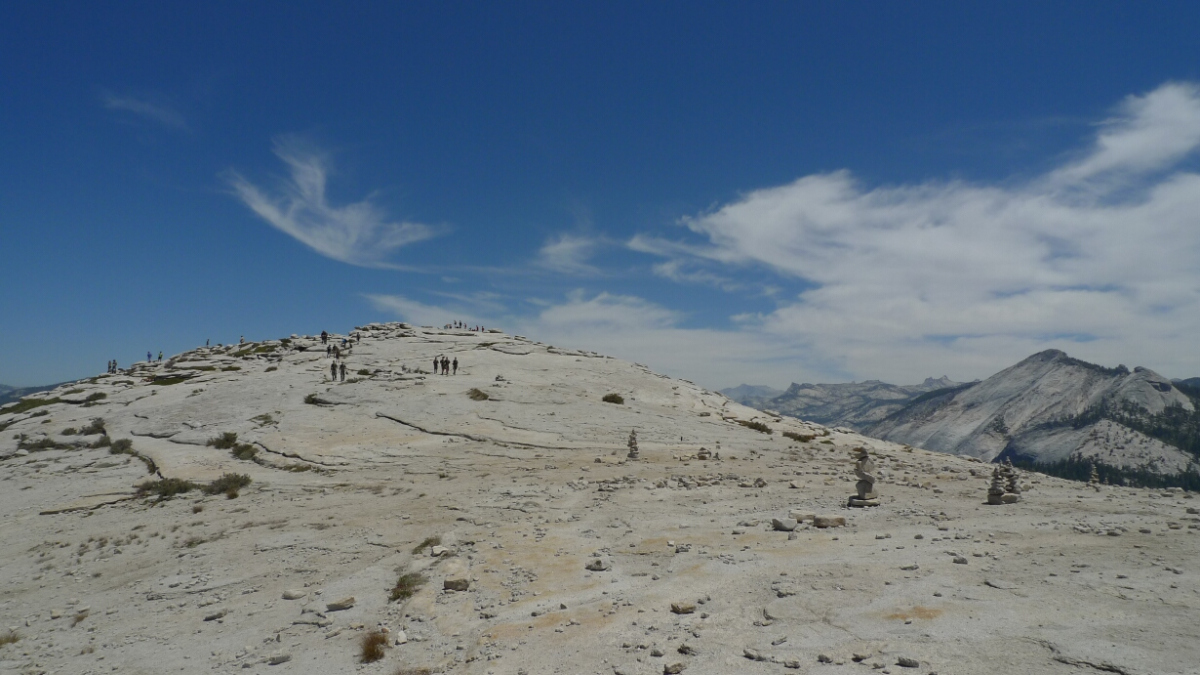 After the cables and the steep descent on sub dome, the hike was much more relaxed now since we had been already up the top. However, with the last 3h in the open sun, our water reserve came almost to an end. The ranger told us about a little spring about an hour down the trail, which looked like a little puddle. It really did not look like much of a spring, but the occasional air bubbles made it seem fresh enough. We took the next stop in Little Yosemite Valley to bath our feet and have a longer break. The hike down took longer than expected, but we were also not in a hurry. So we arrived at the car around 19pm, found all our chocolate (and especially the chocolate covered cherries!) melted. Tired but happy, we joined the car queue out of the valley towards Dimond O. It really was an amazing hike – quite strenuous, but the magnificent views throughout the trail and on top of Half Dome were totally worth it.