The Grand Walk in San Francisco

One of the things i was excited to do in San Francisco was the Grand Walk. The walk goes all the way from Lands End to Fisherman’s Wharf in 6 miles along the coastline passing the Golden Gate Bridge on the way. The Grand Walk is a combination of a couple of short trails rather than one single hike. Getting to the trail head takes only about 30 minutes by bus from Downtown. Here is a map of the first (and more exciting) half of the walk, going from Lands End to Baker Beach and the batteries. 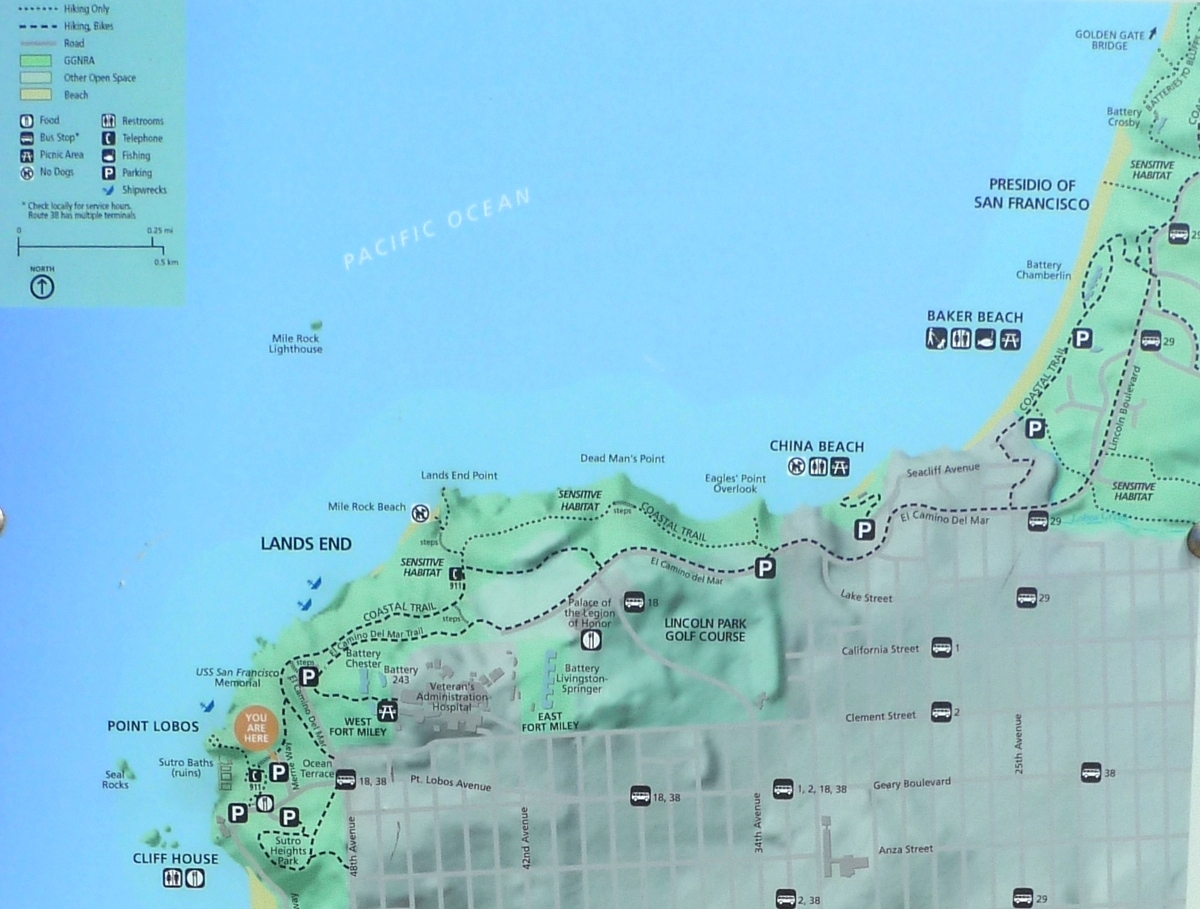 After getting off the bus, i went down to the ruins of Sutro Baths. The mostly sandy trail starts just above the Sutro Baths through a little pine forest. The trail follows the rugged coastline, with beautiful views of the Golden Gate Bridge and the South Bay along the way. Depending on your schedule, a couple of steep side trails branch from the Coastal Trail to small bays and lookouts, and finally Lands End Point. Just after Eagle’s Point Lookout, the trail turns inland and brings you to the fancy neighborhood of Sea Cliff. Following El Camino de Mar, you take a left at 25th Ave to reach the southern tip of Baker Beach. This turn is not sign-posted and the only point where you could miss the trail.

At the end of Baker Beach, a staircase brings you up a steep sandy dune to Lincoln Blvd. From there you follow the trail next to the road to the GGB. After walking underneath the bridge, the trail turns into a concrete walkway and the number of people increases suddenly. The second part of the hike leads you through Crissy Fields and eventually to Fort Mason. The walk is now pretty flat with not so many exciting views and it stretches out quite a bit in the end. However, you can stop at the Wave Organ on the way and enjoy a snack with the sounds of the ocean.

It took me about 5 hours for the trail, including several snack breaks and look out visits during the first half the trail. Especially the Coastal Trail at Lands End provides you with beautiful views and there seems to be hardly anyone around during the week. I totally recommend this walk if you have a couple of days to spend in San Francisco.