Biking from Berlin to Paderborn 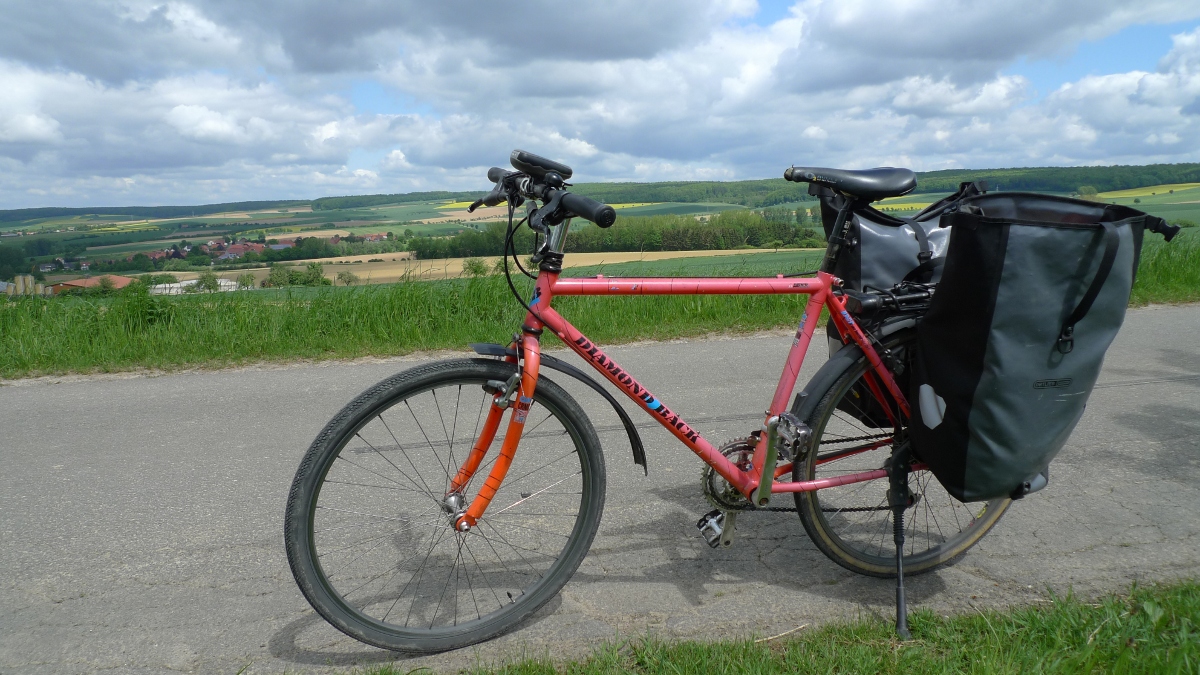 The plan to bike to Paderborn hatched shortly after getting the notification of acceptance for a paper at the Workshop on Wireless Network Measurements (WiNMee) 2012. A little research revealed that the R1 European bike route is going almost all the way from Berlin to Paderborn. However, the R1 follows not exactly the line of sight between the two places, it rather zigzags you around beautiful sights and landscapes along the way. Thus it is an awesome route, but adds a bunch of extra kilometers to your agenda. For this reason, i created a modified version with gpsies resulting in a distance of 480 km, which is about 200 km shorter than taking the R1 all the way to Paderborn. I took my Garmin Oregon 400t along, the gpx tracks are attached to the post.

I started on a hot Friday morning. Weather reports predicted a sunny day with possible showers and thunderstorms in the afternoon. With this expectation, i tried to hurry out of town. I made my first stop at Beelitz-Heilstätten, an abandoned sanitarium about 60 kilometers south-west of Berlin. It is still in pretty good shape, and i met several people walking around in the area. I took some pictures and then i was eager to get on my bike again. 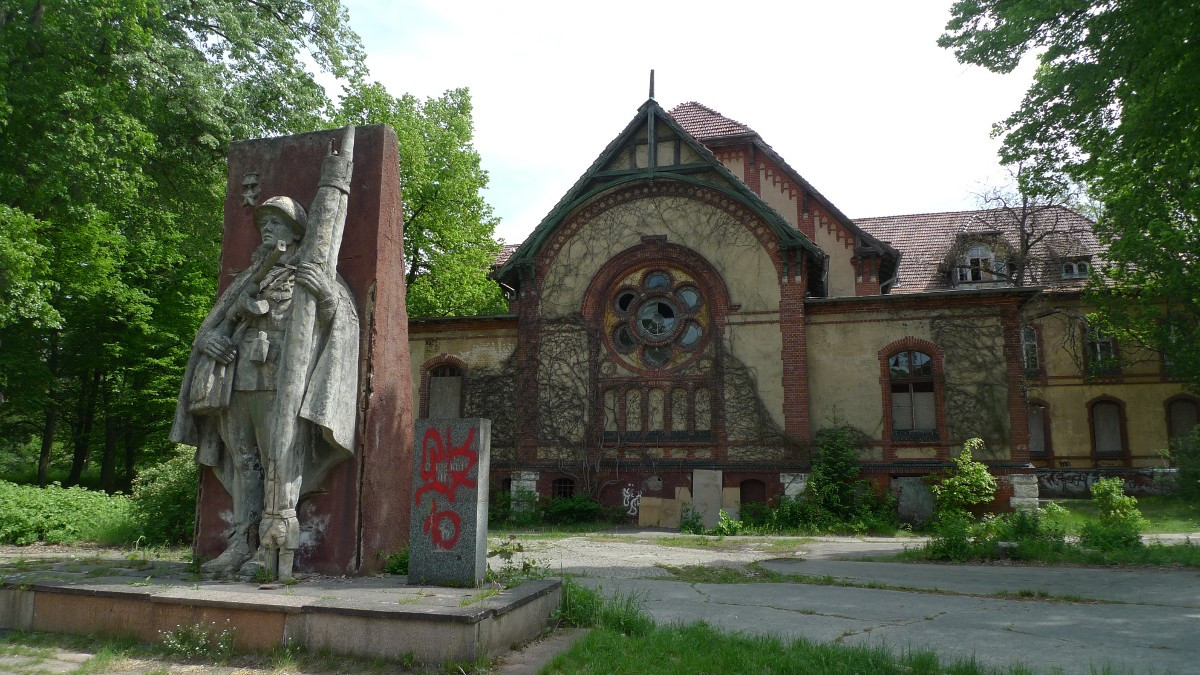 Back on the road, i enjoyed a pretty nice part of the R1 that has just been finished. Smooth asphalt through Brandenburg’s forests brought me quickly close to the place where i planned to stay for the night. The sun was covered by dark clouds by now and a 2 hour thunderstorm made me take a break in the shelter of an abandoned train station. I finally reached the little lake where i had planned to stay. I set up my tent quickly, enjoyed my trail mix with smoked almonds and read Max Frisch’s Stiller until i fell asleep. The next day started with a bike ride to Zerbst and breakfast in the local bakery. After warming up with a large coffee, i made my way to the shores of the Elbe river. With the sun still low, there were beautiful reflections on the shallow water. 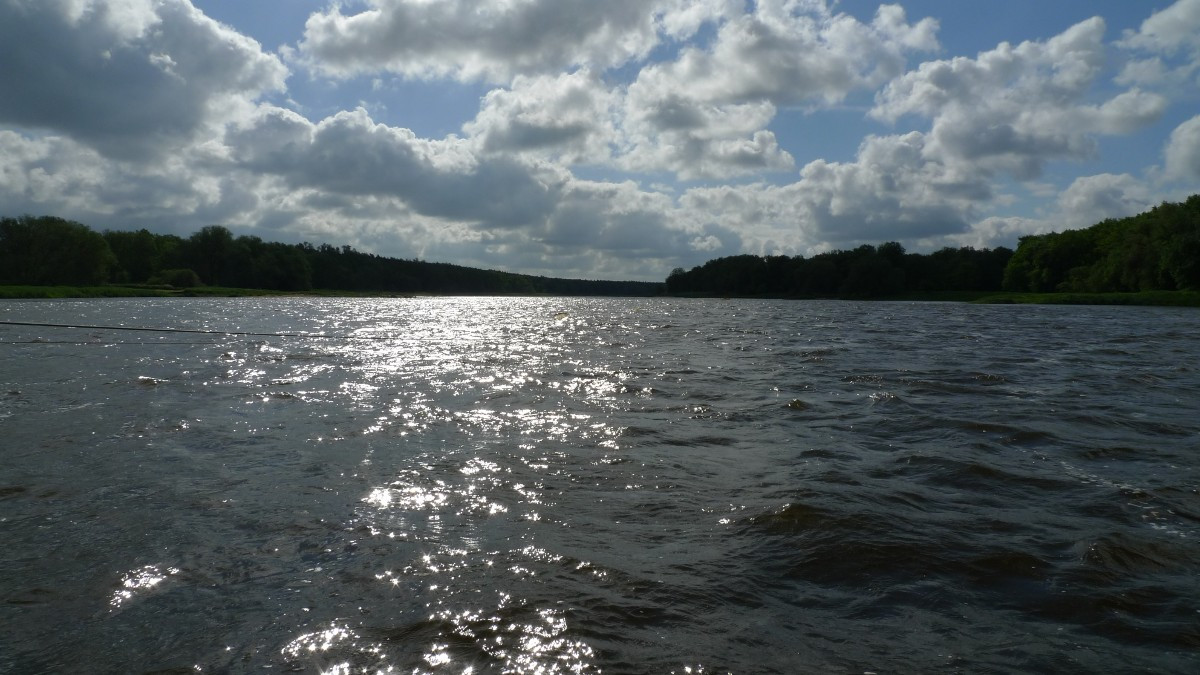 Some hours later, i could finally see the first elevations of the Harz mountains. Soon afterwards, the path started to get hilly. The pattern for the next day of bike riding was as follows: up to the hilltop to get a beautiful view of the landscape and a cute, ancient city, then down a path to visit the city. It was very exhausting but the views were totally worth it. Here is Blankenburg after just passing through it. 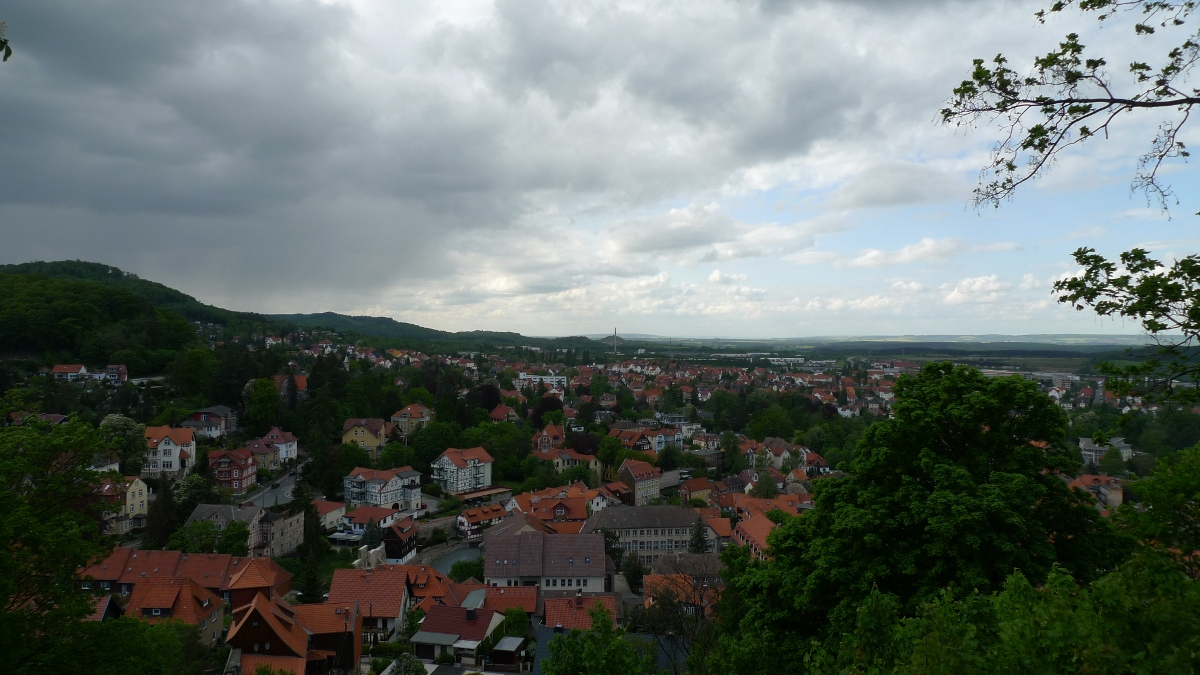 I found a place to camp shortly afterwards in the midst of the Harz mountains. The next day started with a breakfast in Goslar and then went on in the same up and down rhythm for hours. Finally, i reached the end of the Harz. The following Weserbergland was not very flat as well, but the slopes were more gentle. This night, i found a wonderful camp site above some corn fields, with freshly mowed grass and a little bench – perfect! After setting the tent up and having dinner (bread + cheese), the farmer came to visit with his car, explaining that this is not a regular camp site. He liked the idea of the bike trip though and made a generous exception for a night. Just when he left, he told me that in the stone quarry just behind the line of trees, for the first time in decades an eagle owl was spotted breeding, so it was currently a no-go area. Fine enough, i was too exhausted for that climb anyways. 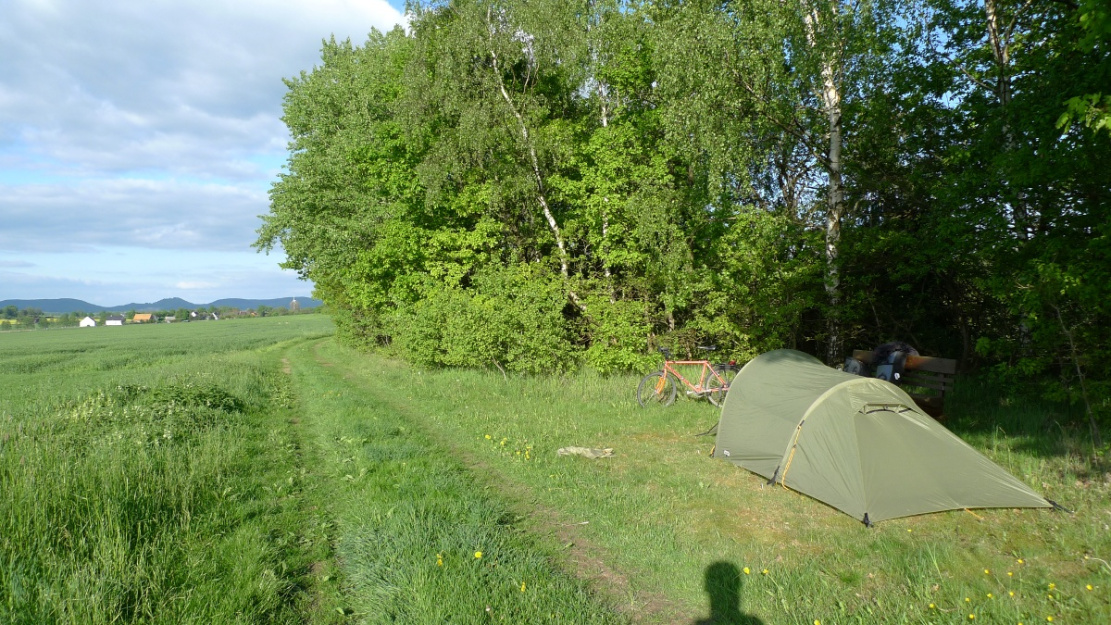 After 3 days of bike riding and only 70km away from Paderborn (and hot showers), i was very motivated to get on my bike again the next morning. The path turned out to be in great shape, following the Weser river for most of the time. After a long break in the rare sun beams, i found this pollen-bathed fellow on the path. 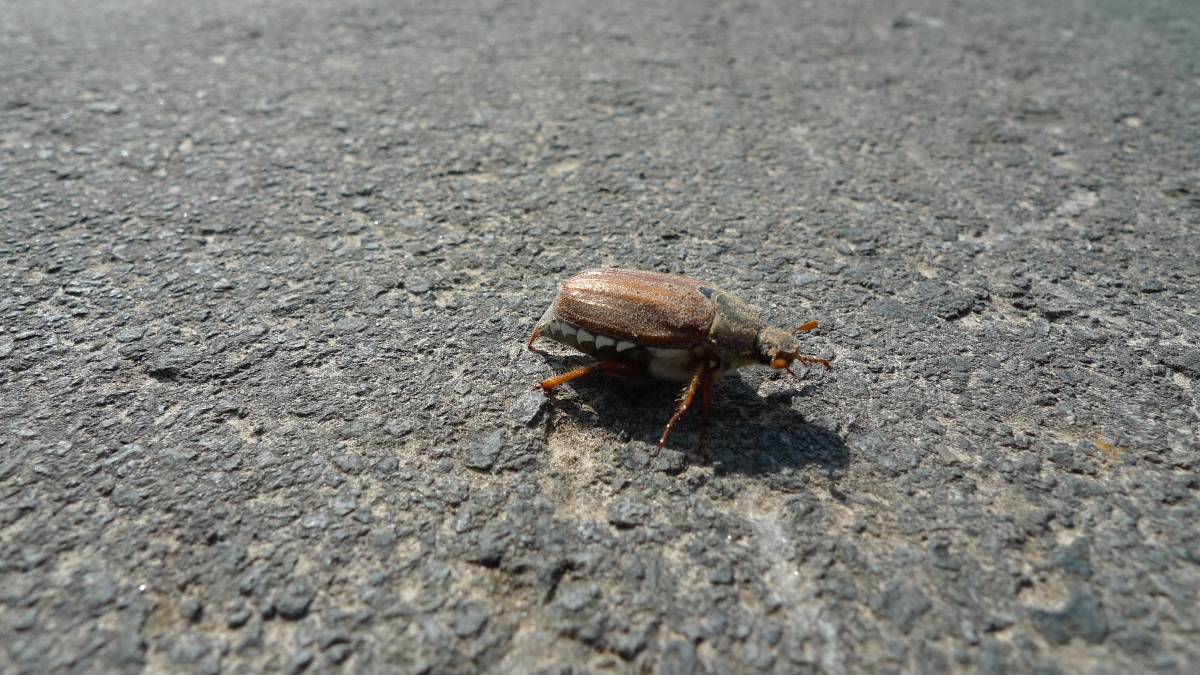 For the last 20 kilometers of the ride, i finally left the R1 for good at Leopoldstal and just had to cross the Egge ridge to end up in Padeborn on the other side. However, i didnt know that this meant a 300m rise in elevation in just 3km on wet and muddy hiking paths. I had to get off my bike and drag it across the mud for most of the time. Shortly afterwards a concrete road brought me all the way to Paderborn. 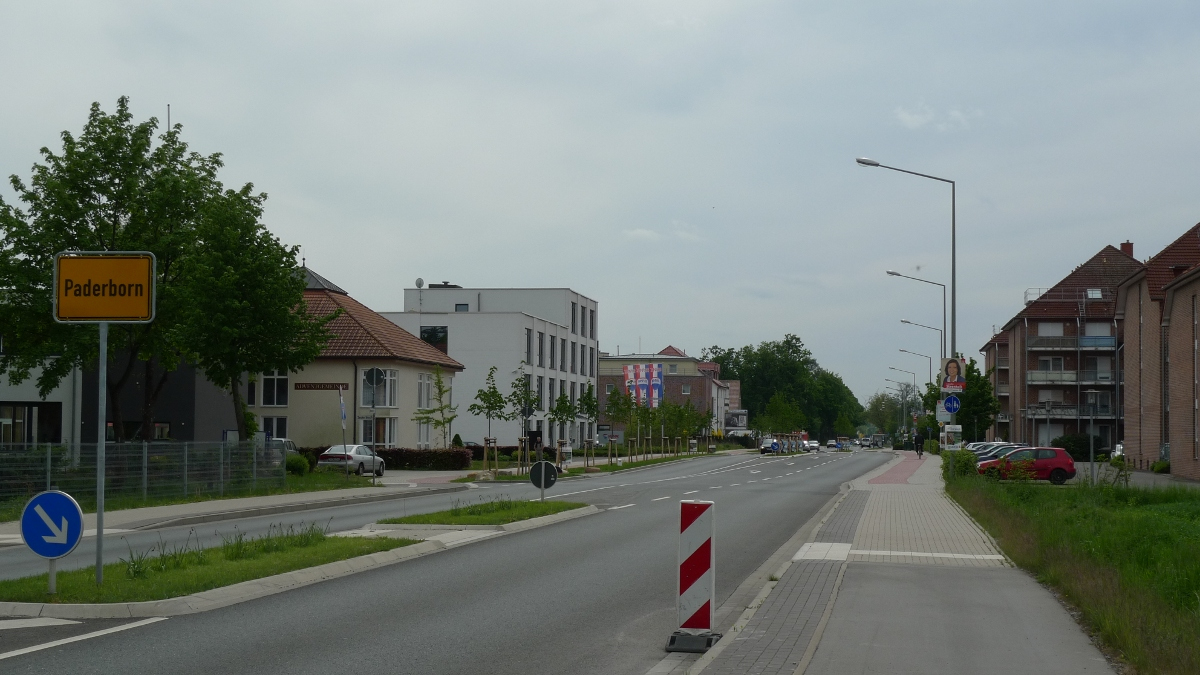 About 2 months later, thinking back of the trip brings back nice memories. When i arrived i was pretty exhausted, but also saw many new places, encountered many friendly and helpful people, and spent a couple of days out of my four walls. Taking the train back in took only 5 hours, but was hardly as much fun.